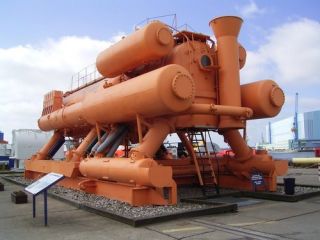 The Helgoland underwater laboratory, is an underwater habitat. It was built by Dr‰ger in L¸beck, Germany, in 1968, and was the first of its kind in the world built for use in colder waters.

The UWL meant that divers were able to spend several weeks under water. The scientists and technicians would live and work in the laboratory, returning to it after every diving session. Only once they had reached the end of their stay did they decompress in the UWL itself, being able to then resurface without coming to any harm.

A great part of our knowledge about how man copes when isolated under hyperbaric pressure under water for an excessively long time comes from the Helgoland project.

The UWL was used in the waters of the North and Baltic Seas as well as on the east coast of the USA. At the end of the 1970s it was decommissioned. In the summer of 1998 the German Oceanographic Museum was gifted the UWL by the GKSS Research Centre, Geesthacht (the picture above is from that time).